நம்ம கல்வி
தமிழ்
தமிழ் Tamil is a Dravidian language predominantly spoken by the Tamil people of India and Sri Lanka. Tamil is an official language of two countries: Sri Lanka and Singapore. It has official status in the Indian state of Tamil Nadu and the Indian Union territory of Puducherry. It is used as one of the languages of education in Malaysia, along with English, Malay and Mandarin.

Tamil is spoken by significant minorities in the four other South Indian states of Kerala, Karnataka, Andhra Pradesh and Telangana and the Union Territory of the Andaman and Nicobar Islands. It is one of the 22 scheduled languages of India.

Tamil is one of the longest-surviving classical languages in the world. It is stated as 20th in the Ethnologue list of most-spoken languages worldwide. Tamil-Brahmi inscriptions from 500 BC have been found on Adichanallur and 2,200-year-old Tamil-Brahmi inscriptions have been found on Samanamalai. A study conducted by Germany's Max Planck Institute for the Science of Human History found that the Dravidian language family, of which Tamil is a part, may be approximately 4000–4500 years old.

It has been described as "the only language of contemporary India which is recognizably continuous with a classical past." The variety and quality of classical Tamil literature has led to it being described as "one of the great classical traditions and literature of the world".

​More than 55% of the epigraphical inscriptions (about 55,000) found by the Archaeological Survey of India are in the Tamil language. Tamil language inscriptions written in Brahmi script have been discovered in Sri Lanka and on trade goods in Thailand and Egypt. The two earliest manuscripts from India, acknowledged and registered by the UNESCO Memory of the World register in 1997 and 2005, were written in Tamil.

The simple fact that the Tamil language is still in such wide use is as surprising as it is amazing. Tamil is the oldest living language in the world, that's still being used today.

In 2004, the Union Cabinet (UNESCO) created a new category of languages known as classical languages, which would be based on certain criteria. Tamil was the first to be included in this. The criteria requirement was based on antiquity, a rich and varied ancient text and original literary tradition.

The World Classical Tamil Conference 2010 was an international gathering of scholars, poets, political leaders and celebrities with an interest in Tamil people, the Tamil language and Tamil literature. It was held in Coimbatore, Tamil Nadu between 23 June and 27 June 2010 with an expenditure of more than 500 Crores.

The WCTC was held in Coimbatore and chaired by the then chief minister of Tamil Nadu, M.Karunanidhi and was organised by his government. The conference was inaugurated by then president of India, Pratibha Patil. Finnish Tamil scholar Asko Parpola was awarded the Kalaignar M.Karunanidhi Classical Tamil award.

The theme song, "Semmozhiyaana Thamizh Mozhiyaam" was penned by the then Tamil Nadu Chief Minister M.Karunanidhi with music by A.R. Rahman. This song got the great impression by the Tamil People across the globe. The video was directed by Gautham Menon which had various artists, musicians, singers. The video given below depicts the pride of Tamil Language.
After Tamil Brahmi fell out of use, Tamil was written using a script called the vaṭṭeḻuttu amongst others such as Grantha and Pallava script. The current Tamil script consists of 12 vowels, 18 consonants and one special character, the āytam. The vowels and consonants combine to form 216 compound characters, giving a total of 247 characters (12 + 18 + 1 + (12 x 18)). All consonants have an inherent vowel a, as with other Indic scripts. This inherent vowel is removed by adding a tittle called a puḷḷi, to the consonantal sign. For example, ன is ṉa(with the inherent a) and ன் is ṉ (without a vowel).​

Old Tamil is the period of the Tamil language spanning the 3rd century BC to the 8th century AD. The earliest records in Old Tamil are short inscriptions from between the 3rd and 2nd century BC in caves and on pottery. These inscriptions are written in a variant of the Brahmi script called Tamil-Brahmi. The earliest long text in Old Tamil is the Tolkāppiyam, an early work on Tamil grammar and poetics, whose oldest layers could be as old as the 1st century BC. A large number of literary works in Old Tamil have also survived. These include a corpus of 2,381 poems collectively known as Sangam literature. These poems are usually dated to between the 1st and 5th centuries AD.

Middle Tamil Period includes Vatteluttu script in stone during Chola period c.1000 AD at Brahadeeswara temple in Thanjavur, Tamil Nadu. The evolution of Old Tamil into Middle Tamil, which is generally taken to have been completed by the 8th century, was characterised by a number of phonological and grammatical changes. In phonological terms, the most important shifts were the virtual disappearance of the aytam (ஃ), an old phoneme, the coalescence of the alveolar and dental nasals, and the transformation of the alveolar plosive into a rhotic. In grammar, the most important change was the emergence of the present tense. The present tense evolved out of the verb kil (கில்), meaning "to be possible" or "to befall". In Old Tamil, this verb was used as an aspect marker to indicate that an action was micro-durative, non-sustained or non-lasting, usually in combination with a time marker such as ṉ (ன்). In Middle Tamil, this usage evolved into a present tense marker – kiṉṟa(கின்ற) – which combined the old aspect and time markers.

The "Nannul" remains the standard normative grammar for Modern literary Tamil, which therefore continues to be based on Middle Tamil of the 13th century rather than on Modern Tamil. Colloquial spoken Tamil, in contrast, shows a number of changes. The negative conjugation of verbs, for example, has fallen out of use in Modern Tamil – instead, negation is expressed either morphologically or syntactically. Modern spoken Tamil also shows a number of sound changes, in particular, a tendency to lower high vowels in initial and medial positions, and the disappearance of vowels between plosives and between a plosive and rhotic. The 247 Tamil Characters are given below, 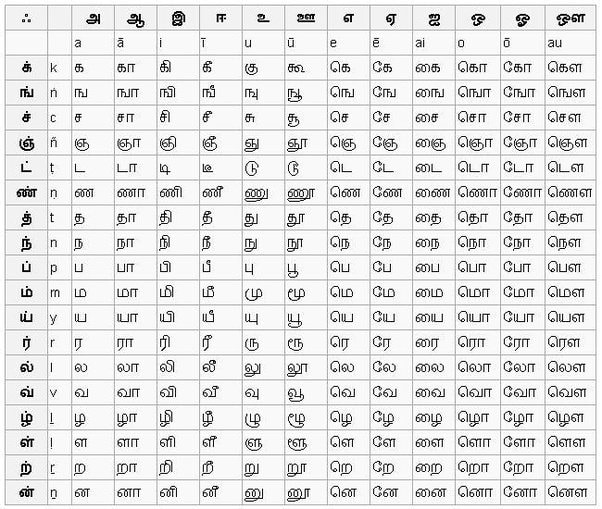 The earliest Tamil literature goes back to the Sangam period perhaps from 600 BC - 200 AD. The compilation of the corpus of literature produced in this Congress (Sangam) is known as the Sangam literature. Three sangams at Madura, Kapatapuram and northern Madura respectively are believed to have existed. Most of the works relating to the first two sangams dealt mainly with music and dance. Unfortunately Tolkappiyam is the only available work of these two Sangams. Tolkappiyam is a work on the grammar of the Tamil language and the earliest extant work of Tamil literature. It is written in the form of noorpaa (short formulaic compositions).

In third Sangam period, a collection of minor works called Padinen-kizhkkanakku which deals mainly with moral virtues was also produced. Among them, the most notable is Tiruvalluvar's Tirukkural or Kural with philosophy, ethics and wise maxims being the main emphasis. Mahatma Gandhi, India's father of the nation, said, I wanted to learn Tamil, only to enable me to study Valluvar's Thirukkural According to the Mahatma Gandhi, "It is a treasure of wisdom.

The Sangam literature, unlike the Rig Vedic texts, was secular in nature and revolved around the themes of various heroes and heroines. The Sangam literature provides very valuable information on the social, economic and political life of the people living in deltaic Tamil Nadu in the early Christian centuries. The post-Sangam period (200-600 AD) is notable for the composition of five great Tamil epics; Silappadikaram, Manimekalai, Jivaka chintamani, Valaiyapati and Kundalakesi. The five minor works viz. Yasodharakaviyam, Chulamani, Perunkathai, Nagakumara kaviyam and Nilakesi are the contribution of some Jain authors.

Between 600-900 AD, the Tamil literature came under the influence of Saiva and Vaishnava saints called Nayanmars and Alvars respectively. The hymns of the Saiva saints were later collected into twelve anthologies called Tirumuraikal. The Periya Puranam, also called Tiruttondar Puranam, composed by Sekkizhar in the 12th century AD , was considered as the twelfth Tirumurai. The Vaishnavaite saint Nathamuni (824-924 AD) compiled the Vaishnava hymns into four books called Nalayira Divya Prabandham. Periyalivar, Poigaialvar, Bhutattalvar,Andal are some other Vaishnavaite saints who have done a meticulous work to the Tamil literature. Among them Andal is the only woman saint.

One of the great Tamil poets, Kamban, belonged to this period. He was the greatest of the court poets of Kulottunga Chola III (1178-1218 AD). He adapted Valmiki's Ramayana in Tamil in his Kamba Ramayanam, which is very unique in its style and technique. He also composed other works like Erelupadu and Sathakoparandadi. The other great poets of this period include Ottakkuttan, Pugazhendi, Auvaiyar, Jayankondan, Iraiyanar, Kalladanar, Pavananti. Another important poet who flourished during the Chola period was Kuttan, who authored great works like Nalayirakkovai, Parani, Tukkayagapparani, Sarasvatiyandadi and Arumbaittollayiram. Other noted scholars of the Chola period include Kuttan, Tirutakadevara Talamokti, and Venkatamadhava.

As far as the modern period is concerned, Umaruppulavar (1605-1703 AD) composed a verse on the life of Prophet Muhammad, called the Sirappuranam. He was the earliest Muslim Tamil poet. Following him Mohamed Ibrahim wrote Muhaidin Puranam (1845 AD).An Italian Christian missionary, Constanzio Beschi (1680-1747 AD), under a pseudonym as 'Viramamunivar', wrote a classic Tembavani, on the life of Jesus Christ.

Viramamunivar's Paramartta Gurukathai of the 18th century is the earliest novel written in Tamil. However, Pirataba Mudaliyar charittiram written by Vedanayagam Pillai in 1875 only is considered as the first Tamil novel. The other important works of this period include Bharatam of Perundevanar, Kamalambalcharittiram of Rajam Ayyar, Padmavatichaittiram of Madhaviah, Menaka and Balamani of Vaduvur Duraiswamy, Ratnapurirahasyam of A.Kuppuswamy, Mannasai and Kariyadarisi of Shankara Ram etc.M.Varadarajan, C.N.Annadurai, Akilan, Anuttama, Jayalakshmi Srinivasan, Kodainayaki Ammal, N.Parthsarthy, C.Subramanyam, Jayakantan and Sundaram Ramaswamy. V.V.S.Aiyar,Kalki, Pudumaippittan, B.S.Ramayya and ASP Ayyar are some of the eminent novel and short story writers who added credit to Tamil.
Kalignar M.Karunanidhi was known for his contributions to Tamil literature. His contributions cover a wide range: poems, letters, screenplays, novels, biographies, historical novels, stage-plays, dialogues and movie songs. He has written Kuraloviam for Thirukural, Tholkaappiya Poonga, Poombukar, as well as many poems, essays and books. Apart from literature, Karunanidhi has also contributed to the Tamil language through art and architecture. Like the Kuraloviyam, in which Kalaignar wrote about Thirukkural, through the construction of Valluvar Kottam he gave an architectural presence to Thiruvalluvar, in Chennai. At Kanyakumari, Karunanidhi constructed a 133-foot-high statue of Thiruvalluvar in honour of the scholar. 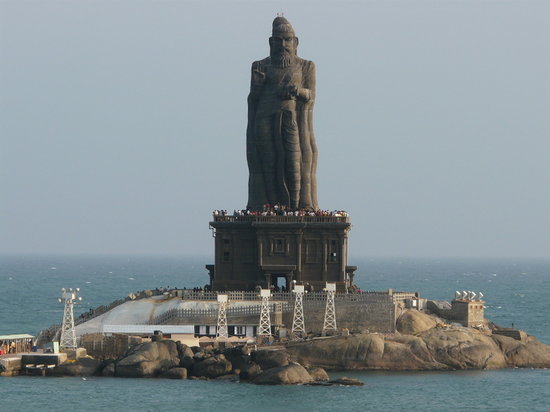